What CAIR Wants You To Know About Islam

CAIR has come out with a new campaign:

A prominent national Islamic civil rights and advocacy group today announced the launch of a major initiative to help enhance understanding of Islam and Muslims in the news media.

The idea is to make available to journalists a media guide for journalists called "Beyond Stereotypes." A handful of the pages can be viewed online. Here is the table of contents (click to enlarge): 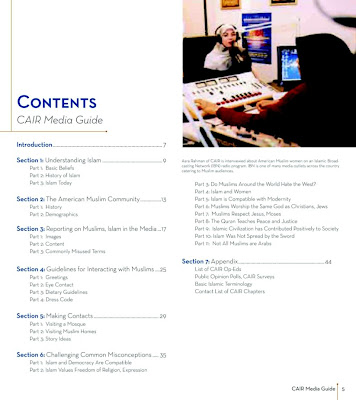 CAIR is an unindicted co-conspirator in the Hamas funding case, which is to be retried. Investor's Business Daily has their own take on CAIR's project:

It asserts that "common misperceptions in the media include the notion that Islam is not compatible with democracy or modern culture; that the Quran teaches violence; that Muslims around the world hate the U.S.; that Islam does not respect women's rights; and that all Muslims are Arab."

At least CAIR got the last one right. Muslims are also Asian and African. Which means it's batting .200 in the accuracy department.

CAIR, recently named an unindicted co-conspirator in a federal terror case, says news stories since 9/11 have perpetuated negative stereotypes about Muslims. It hasn't been hard to do.

"Islamophobes" weren't the only ones repulsed by the story of an Islamic court sentencing a Saudi rape victim to 200 lashes for violating Shariah law, which CAIR's leaders are on record hoping will one day replace the Constitution. Or the Muslim father who strangled his daughter to death in Canada for refusing to wear her veil.

Nor did critics of Islam misquote the Ayatollah Khomeini when he bellowed: "Islam says: Kill all the unbelievers just as they would kill you all! There are hundreds of other (Quranic) psalms and Hadiths (sayings of the Muslim prophet Muhammad) urging Muslims to value war and to fight."

CAIR has been consistently dishonest on the issue of what it claims are hate crimes against Muslims--as the numbers indicate that unlike incidences of Anti-Semitism, anti-Muslim incidences decline each year.