Olmert seems to be standing firm--except that the issue itself is nothing of the sort:

Prime Minister Ehud Olmert on Sunday rejected Hamas' offer of a cease-fire in the Gaza Strip, saying the government would not hold talks with the Islamist group until it recognizes Israel.

Unlike the PA that will recognize Israel, but not as a Jewish state.

Or maybe not: Fatah map shows all of Israel as Palestine 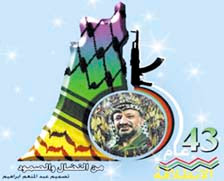 Fatah is planning to mark its 43rd anniversary this year with a new poster that presents all of Israel as Palestine.

A Fatah 43rd anniversary poster depicts a map of Israel that is entirely draped with a Palestinian keffiyeh next to a rifle signifying armed struggle.

Designed specifically for the occasion by Abdel Mun'em Ibrahim, the poster features a map of Israel that is entirely draped with a Palestinian keffiyeh scarf.

It also carries a drawing of a rifle as a symbol of the "armed struggle" against Israel.

The poster, which has been endorsed by the Fatah leadership, has already been posted on a number of Fatah-affiliated Web sites.

The underlying message of the poster is that Fatah, like Hamas, does not recognize Israel's existence.

The emblem is in violation of Fatah's declared policy, which envisions an independent Palestinian state alongside, and not instead of, Israel.

By including a rifle in the poster, Fatah is sending a message to the Palestinian public that it has not abandoned the option of "armed resistance," despite current peace talks with Israel. [emphasis added]

But such subtleties are lost on Olmert

One can only hope this is All-Merde's last stand. He's killing Israel bit by bit!